A Barn Owl From Buffalo

Of all the types produced by Curtiss in Buffalo during the 1930s and 40s, the O-52 Owl is probably in the top five on many a wing-nut's 'obscure' list. Whenever I see a photo of an O-52, it's almost always accompanied by a chorus of enthusiasts singing the same refrain, 'Hmmm... that's a new one on me'.

The O-52 is interesting in that it was not only ordered by the Army Air Corps without having tested a prototype (which in and of itself was not so awfully unusual), but more so because no prototype was ever built to test. Your blogmeister has found precious little information about the development of this wonderful, tubby little O-bird (that's wing-nut parlance for 'observation aircraft'), and no specific details as to why the type flew straight off'a the proverbial drawing board and into production. We here at BuffaloWingz are sure that the straight-dope is out there, hidden, camouflaged, waiting to be found... just haven't spied it yet.

What we do know is that, like so  many military aircraft produced in the USA during the mid to late 1930s, the Curtiss O-52 Owl was dang-near obsolete right from the get-go. Production began in early 1941 and the type was tested under operational conditions for the first time during the well-known US Army GHQ Maneuvers later in the year. The airplane was found... wanting. Actually, to be fair, it wasn't only the O-52 that was found wanting. In light of the then-modern battlefield conditions observed during the war in Europe up to that time (see what we did there?), the whole idea of the so-called 'heavy observation aircraft' was called into doubt.

Now, your blogmeister could keep rollin' down the tracks on this train of thought and wind up wandering far outside the scope of this-here cyber-rag. But he ain't gonna... and this bit is getting too long anyway, so... lemme backtrack a bit in order to wrap it up.

The Curtiss O-52 Owl first flew in February of 1941. As has been mentioned, the type went straight into production... no traditional prototype was produced... the early production ships were used as service test models, similar to the first few early production examples of a much more well-known Curtiss product; the P-40.

Anyhoo, the photo we present here today for the enjoyment of our readership of less-than-half-a-dozen or so shows one of these early production O-52s at the Buffalo Airport on Genesee St. in Cheektowaga, NY.

The guy with the pikshur-maker... the legendary Rudy Arnold. 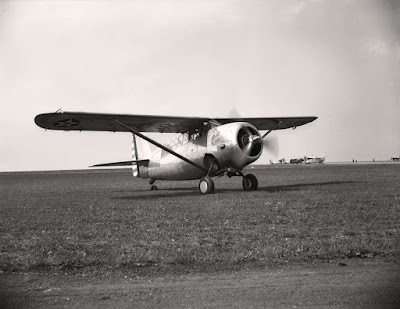 
Oh, as we may have mentioned in the past, your blogmeister is also a webmaster. If you wanna see a few more photos of the O-52, take a looksee at THIS PAGE from a little 'ole website known as the 'Hawk's Nest'.

New comments are not allowed.