Today at BuffaloWingz we're cranking the dial in the 'ole way-back machine a few more turns to the left than usual...

Back in the year nineteen-hundred-and-ten, famed book-man William Randolph Hearst offered up the prize of $50,000 to whomever could make the first successful coast-to-coast flight across the United States of America. The following year a fella named Calbraith Perry Rodgers decided he was gonna make a grab for the green... heck, he had not only been the first private citizen to buy a Wright aeroplane, he had even received a whopping 90 minutes of flying instruction from Orville Wright himself! So he was good to go. But, as they say, (whoever 'they' are) 'ya gotta spend money to make money'... and Cal needed someone to foot the bill that was sure to pile up during what would likely be a several-week endeavor.

Enter J. Ogden Armour of Armour & Company, then-king of the meat-packing industry. Aside from  providing folks across the country with steaks, roasts, smoked hams, and various other related food products of whose contents we'd all probably prefer to remain ignorant, Armour also delved into other consumables such as soft drinks. One such drink was 'Vin Fiz'... one of the most reviled grape soda drinks in the history of history. (The original 'Vin Fiz', that iz... the name has been dusted off and the drink re-invented in recent years. And, although your blogmeister has not yet sampled any of the new brew, he hears that it iz quite palatable.) Apparently the preservation-of-quality-of-product methods used by the 'Vin Fizzers' were somewhat poor, and what was probably a fairly tasty beverage when shipped from the factory more often than not turned rancid upon arrival at its final destination, weeks or months hence. It was described at the time as 'tasting like a cross between river water and horse slop', but your blogmeister's favorite contemporary reference to the original 'Vin Fiz' iz, 'you have to sneak up on it to get it down'.

Anyhoo, eager for an effective and unique method of advertising the diz-mal 'Vin Fiz', Armour agreed to sponsor Cal Rodgers in hiz coast-to-coast attempt. The plane to be used, a Wright Flyer EX, was plastered with the 'Vin Fiz' name and logo, as was the 'Vin Fiz Special', a three-car train that accompanied Rodgers across the country, carrying a back-up aeroplane, a support team of wrench-turners to keep 'em flying, Rodgers' wife Mabel to provide 'other' support (presumably... none of our business, though), hiz Mother to nag everyone and provide tuna casserole, a platoon of reporters to... report, and, undoubtedly, a number of traveling salesmen for Armour and Vin Fiz to handle the biz.

Rodgers carried a bottle of the grape soft drink with him all the way across the country, from Sheepshead Bay, NY to Pasadena, CA and it apparently survived intact, (physically, not palatably) which iz something of a miracle as many 'oopsies' were suffered along the way... sixteen in all, we believe, including at least five major accidents that required considerable repair efforts. One of these 'oopsies' happened while Rodgers was in Western New York, on takeoff from a field in Redhouse, near Salamanca, to be exact.

So, finally, this brings us to the reason for this latest installment on BuffaloWingz... here's a much-cleaned-up image taken from a real-photo-postcard that shows Cal Rodgers departing Salamanca, NY, although we don't know if this was the aborted departure which resulted in the 'oopsy' or if this was 'take-two'. 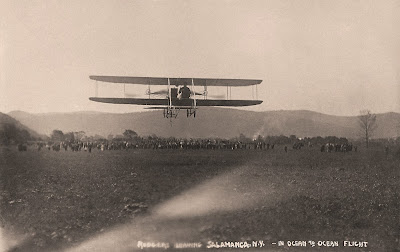 Here's a look at the crate after the 'oopsy'... 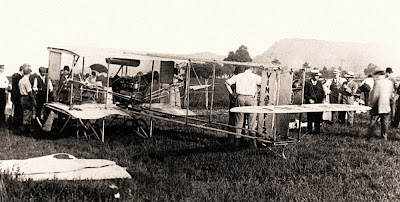 
In the end, Cal Rodgers made it all the way across the country, from New York to California, and became the first person to fly coast-to-coast. However, book-man Hearst had stipulated a time limit of 30 days from departure from one coast to arrival at the other... and Rodgers did not collect the prize, as his journey took more than a month and a half, beginning on September 17th  and ending on November 5th, 1911. He was, however, handily compensated by Armour for the advertising provided by the flight.

Sadly, Rodgers was not to enjoy this compensation or the accolades from the historic journey for very long, as he bought the farm on April 3rd, 1912 while flying a Wright Model B (the back-up crate for the coast-to-coast flight, carried on the 'Vin Fiz Special') during an exhibition in Long Beach, California. Sad as it may be, interestingly, even this tragedy scored another 'first' for Rodgers... the crash occurred after he flew into a flock of birds, making him the first pilot to auger in due to a bird strike.

Okay, that was a bit more typing than your blogmeister had intended, but what the hey. Until next time...

Incoherent rambling by Hawk914 at or around 12:54 AM No comments:

A couple's years back this Turkish Air Force Herky Bird was visiting at Niagara Falls ARS for some reason or other. The official captions for these photos indicated that the C-130E had received a bit of extra TLC from the folks of the 914th AW, but we're unclear as to whether or not that was the prime reason for the Herk's visit.

Regardless of the 'why', the 'who', 'when', and 'where' were dutifully documented by Staff Sergeant Joseph McKee with this set of photos, taken on April 20th, 2011. Worthy of note is the special marking carried over the crew-entry hatch... 2011 saw the 100th Anniversary of the Turkish Air Force... 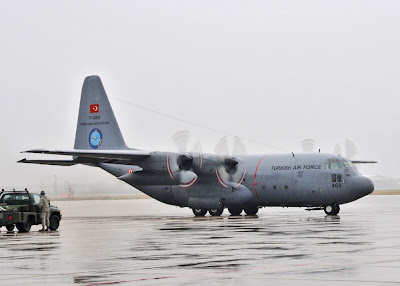 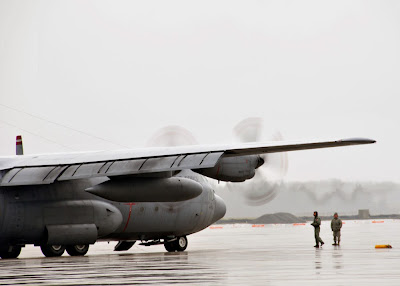 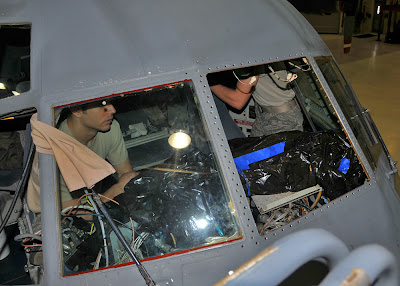 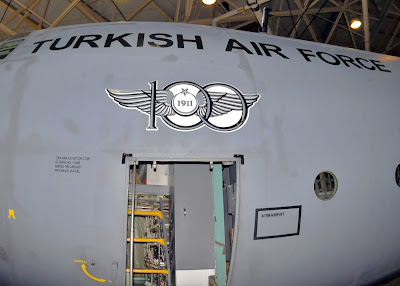 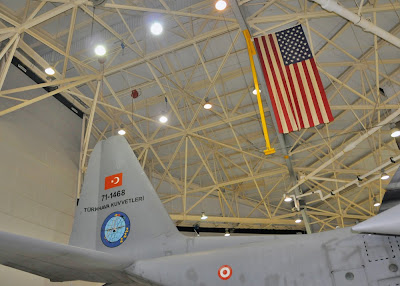 Incoherent rambling by Hawk914 at or around 7:03 PM No comments:

Someone else (namely, your blogmeister) once said that if you can't do something right, you should at least make an attempt to look groovy doing it wrong.

Such was the case with the Bell FM-1 Airacuda. Plagued from the get-go by numerous flaws, Bell's first foray into the world of aviation was an utter failure. Conceived as a long-range heavy fighter, meant to intercept and obliterate enemy bombers with its dual-cannon armament, the Airacuda was itself comparable in size and weight to many of the types that would be its prey, and was slower than most of them. And had it somehow made it into front-line service, seen combat, and encountered more conventional enemy fighters... well, can you say 'good-night, Irene'?

Now, as you, the readership of half a dozen or so might be aware, we like to try to keep things fairly brief here at BuffaloWingz. So a detailed description of the myriad other problems which ensured the Airacuda's status as a hangar queen will not be forthcoming. We will simply say that the Airacuda suffered from problems ranging from chronic and severe engine overheating, to major issues with the electrical system, to unusual flight characteristics. Heck, we haven't been able to confirm it, but as far as we know, the thing didn't even have cup-holders.

What a deplorable state of affairs...

But hey, it was one super-freakin'-groovy-lookin' airplane, wasn't it? 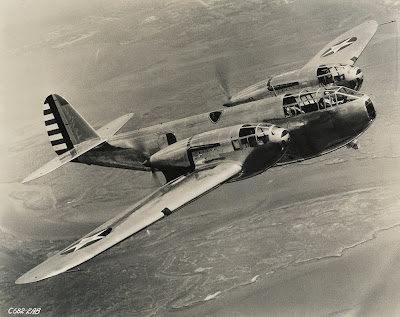 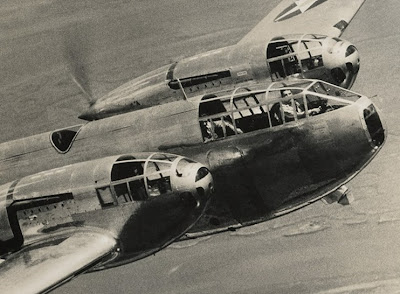