On August 2nd, 1958, fifty-eight years ago today, the U.S. Navy's Blue Angels, flying the Grumman F11F Tiger, were performing in Western New York skies as part of the festivities celebrating the sesquicentennial of the Town of Clarence, a suburb of Buffalo.

At a few minutes past 5PM that Saturday, just before he was to start his solo routine, Lt. John R. Dewenter, the lead solo, experienced an engine failure. When the fan stops turning, it's generally advisable to point the bird in a direction of sparse population and go for a ride in the bang seat. But instead of ejecting, Lt. Dewenter chose to stay with the jet and try to make Buffalo Airport because, as he put it, "there were just too dog-gone many houses down there."

Well, Lt. Dewenter did make the airport, touching down on runway 23 near the northeast edge of the field. Unfortunately that runway was too short for the Tiger. The jet ran off the end of the runway, barreled past the airport boundary and into the intersection of Genesee St. and Dick and Cayuga Roads, narrowly avoiding collision with road traffic, reportedly due in large part to a timely red light, and coming to rest near Joseph DeLuca's Mobilgas service station. Nobody was injured, including Dewenter... but the jet was apparently a write-off.

The following photos were kindly provided by Robert Lackemeyer. Thank you, sir! 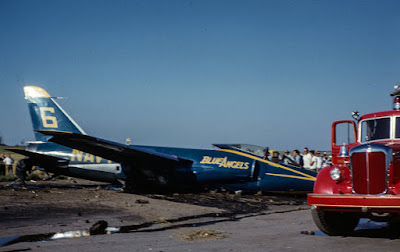 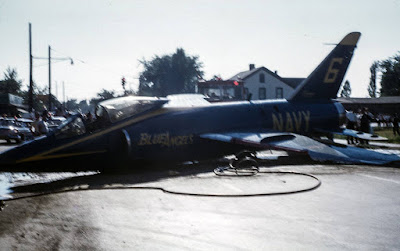 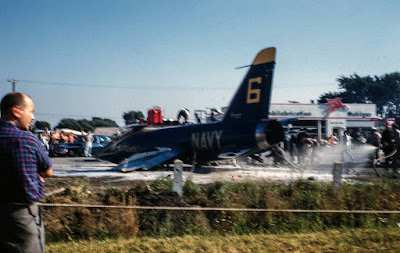 Those among our readership of about half-a-dozen or so who are in the know may catch an apparent discrepancy here... if Lt. Dewenter was the lead solo, why was he flying jet #6, normally flown by Lt. John Damian, the opposing solo, instead of #5? Here's a quote from one of the sources linked below which explains:

"John Damian and I had inaugurated our "back-to-back" pass that year. John did the inverted portion of that maneuver but had been experiencing low oil pressure warning lights which forced him to break off the pass and return immediately to normal flight. For the sake of the maneuver he convinced me that morning that we should switch aircraft for the show. We did, and you know what followed. What incredible timing!" 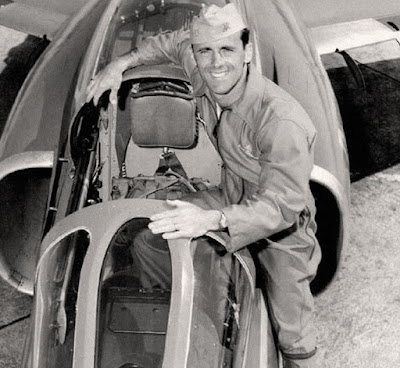 
Take a looksee HERE for more detailed accounts of this incident, including some that were taken from the August 4th, 1958 edition of The Buffalo News. Be sure to follow the three links at the bottom of the page to see everything.

Incoherent rambling by Hawk914 at or around 8:30 PM No comments: